Last weekend I had the privilege to be invited to speak at the inaugural Racketedge conference.

I was really excited as I have been a professional colleague of Howard Green for several years and I was delighted that he has set up a company ‘Racketedge’ partnering with Jonny Fraser- and then setting up this conference.

Tennis is a great sport.  I love working in Tennis and over the years there has been a lack of professional networking opportunities within the Tennis community in the UK.  This conference brought together several practitioners operating in different roles within Tennis- sport science, coaching and fitness.

I will give a brief overview of the presentations: 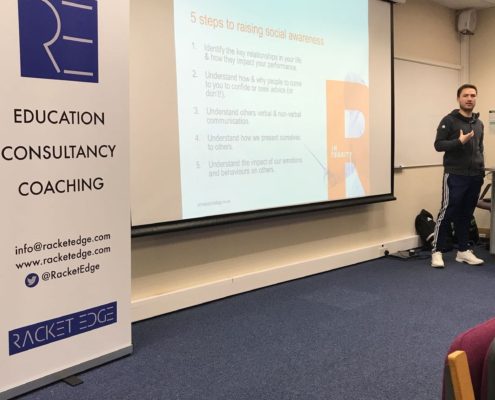 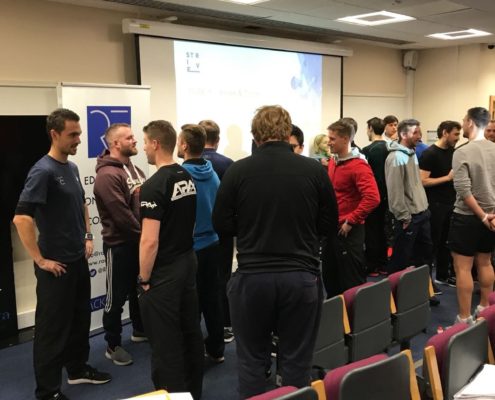 Chris used a lot of group work to  get us to think about the importance of ‘’social awareness.’’  As coaches we often get stuck in the sets and reps but taking the time to know your athlete cannot start until you first take the time to know yourself.  It was fun to pair up with people I hadn’t met before and take the time to share things about myself.  It was also fun to think about my strengths and weaknesses and goals I have. 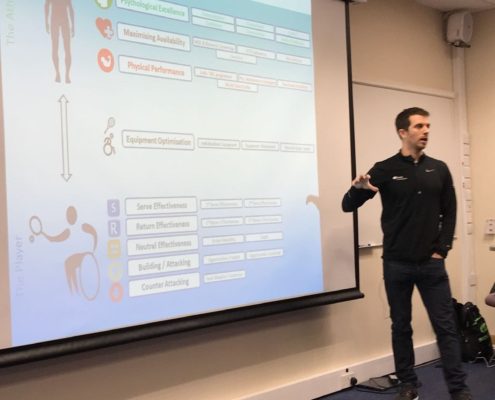 I have known Alex for many years and he is doing a great job with the Tennis Foundation.  This presentation focused on his work with Wheelchair Tennis athletes.  I took away a lot of points.  He spoke about how he is using a lot of physical preparedness models for able bodied sport and redefining them for wheelchair tennis.  Many of his case studies were with a population of n=1 meaning that nearly every athlete has a unique set of individual needs and you have to develop your own tests to determine what physical preparedness means for that athlete.  His take away point was to always focus on what they can do.

Time, Buy In, Lack of knowledge, and Resources available at the organisation were all brought up as barriers. 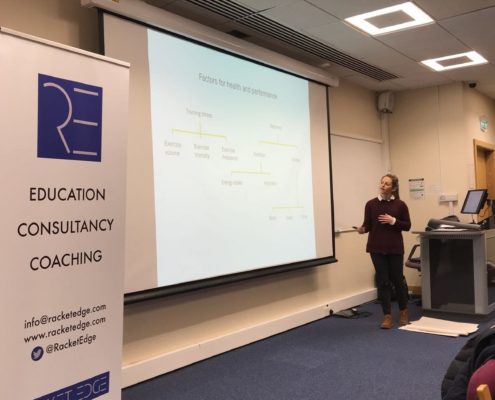 Howard and Jonny presented on their ‘RREADERR’ model which I really liked.  I am familiar with other coaches who have described the Footwork cycle such as Pat Etchberry and David Bailey 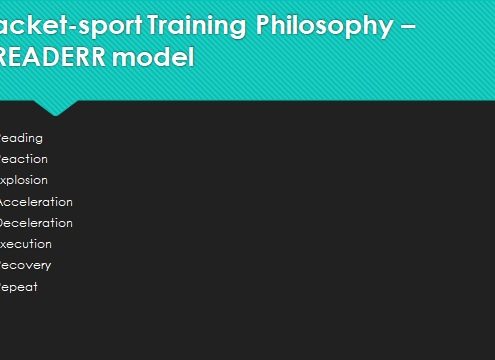 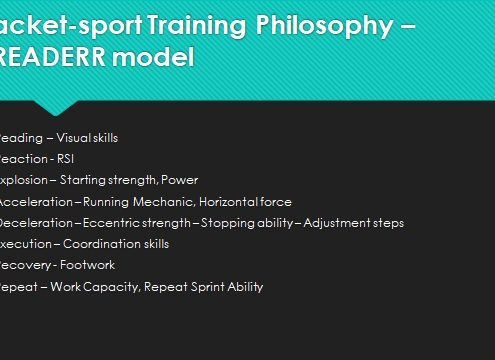 You can get the full flavour of the presentation below which is around 30 minutes but if you just want the footnotes then check out the video series below where I showcase the assessments we use at APA to profile skill, suppleness and speed.  I also go onto to show some of the Basic Method progressions that we use for the four types of Speed that we refer to.  If you search the APA Youtube channel you will be able to find more in depth explanations of the Physical Competency Assessment (PCA) and the Fitness test. 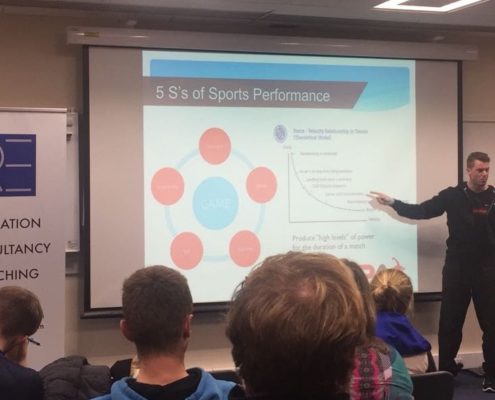 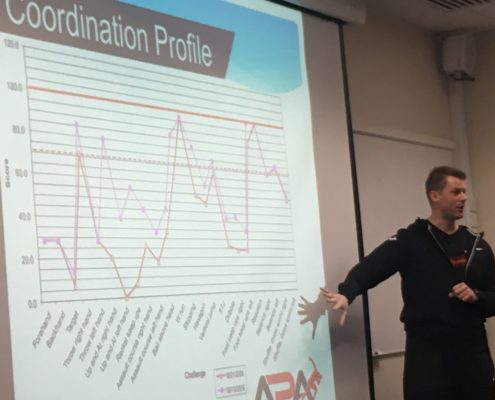 Simon unfortunately sprained his ankle the day before so wasn’t able to deliver the practical workshop on his ‘Super Heroes’ physical literacy curriculum which he is successfully implementing in a number of organisations.  Instead he went through the concept of the syllabus which links a number of fundamental skills to a Super Hero. 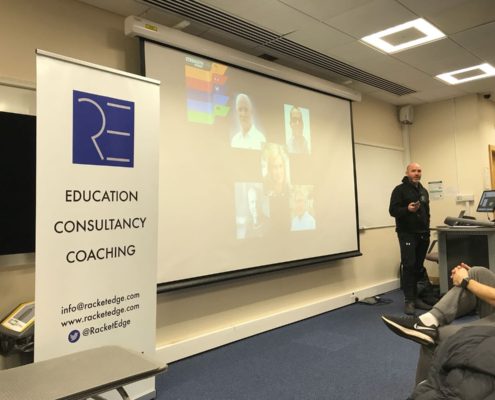 Dom is a personal friend of mine having taken the role of Head of S&C at Halton Tennis Academy only a few years after I started doing the same role at Gosling.  The inspiration for his practical presentation was his observation that ”Boxing is like Tennis without the net.”  They both utilise a lot of repeated bouts of rotational power.  Dom’s own S&C philosophy has a basis (like mine) on having movement efficiency- and being able to harness the power of the hips was a key component of this practical.  We explored exercises to create more mobility and stability around the hips, as well as some exercises to develop rotational power. 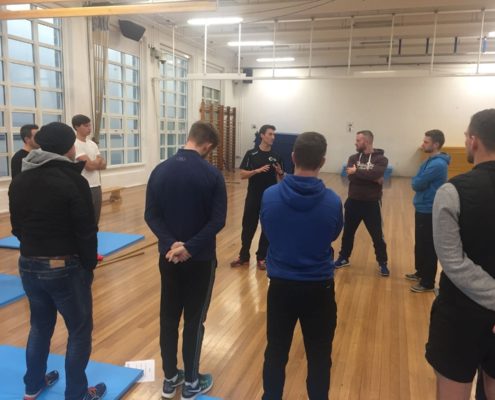 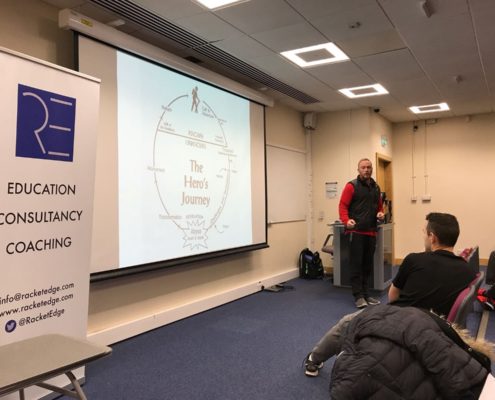 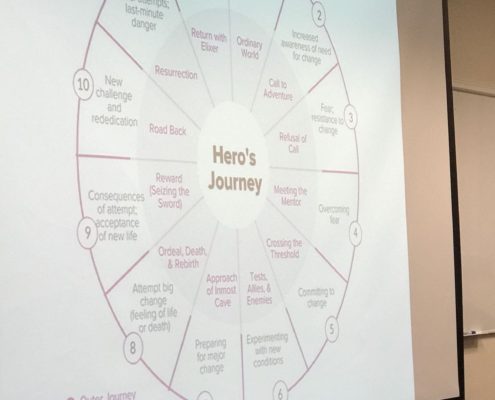 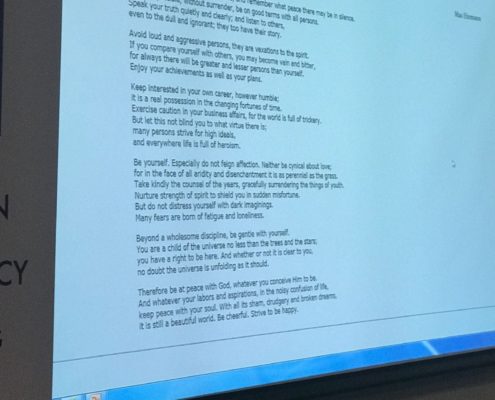 I have listened to Dave speak a few times and I really like his delivery style.  He is someone that embodies the art of coaching as well as the science.  He is clearly a very thoughtful and reflective practitioner who has developed enough experience of elite sport over the years to be able to step back and see the bigger picture.

He started by showing us a great video which really made me reflect on what is important in life and how much gratitude I have to do a job I love.

He then spoke about the Hero’s Journey which the common template of a broad category of tales that involve a hero who goes on an adventure, and in a decisive crisis wins a victory, and then comes home changed or transformed.  This is perhaps a metaphor for the experiences we have as coaches.  He asked us to think about how many times we have faced.

He finished with a poem known as the ”Desiderata Poem” 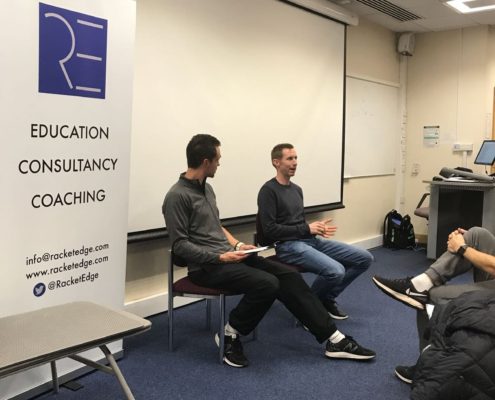 It was great to have a Q&A with Jonny.  He has recently retired from Professional Tennis and shared how he got into tennis, some of his experiences on the Tour- what he felt his strengths were and some of his thoughts on the future of the game.

One of the things he said to me was that ”why wouldn’t you want to maximise your athletic potential?”, when I asked him what he thought about the belief that you don’t need to be that fit to play doubles.”  Yes the problem is that there are several unfit world class professional doubles players that don’t help your case- you could argue.  If they can get to the top and appear to be out of shape perhap you don’t need to train so hard on your fitness.  But you can also see the opposite, and particularly in other sports.  Look at Christian Ronaldo- would you say he has chosen to ease off because he is already a world class performer.  No, he goes to the gym and works to make his athleticism even better.  Better never stops!!!

When’s the best time to focus on single leg training?
Scroll to top