This weekend just passed I had the great pleasure to induct another six candidates through the first part of the 1st4sport Level 2 certificate in Strength & Conditioning.

For those of you who haven’t come across it the basic progression looks something like this:

Level 2 => Design a 4 week plan based around speed, strength and stamina

Level 3 => Design an 8 week plan as part of an annual plan based around speed, power, strength and stamina

I have always felt (just my opinion) that S&C coaches are more comfortable in the gym than on the pitch and so excel in the resistance training part of the qualification, but get much more new information from the speed aspect. 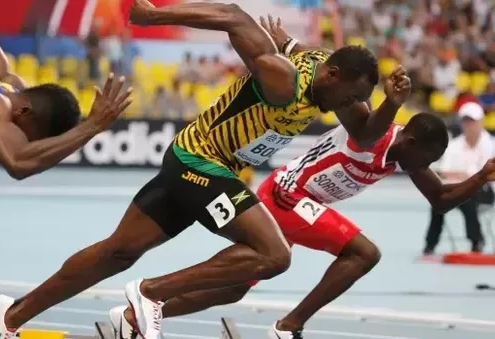 Personally I think this aspect is made more difficult when coaches seem to disagree on the technical model when it comes to how to get somewhere fast.  I tried to give the candidates as broad an overview as I could of the different types of speed and what to look for in terms of teaching cues that relate to the technical model of sprinting.

Typically I start by introducing the topic as Speed, Agility and Quickness as these terms seem to be more familiar.  But as you know at APA we have our our terminology so I then go in to a bit more detail and break it down into:

Please note that there is a reactive component to all these types of speed which is accounted for in the APA method.  However ‘reaction speed’ is something that is focused on in the ‘skill’ element of the APA system- which accounts for reaction speed of any movement not just a locomotive one.

I started by showing them the image of Usain Bolt above which represents the technical model for acceleration (posture, arms and legs) during a 100m race.  This is the most pure form of sprinting.  We focused on acceleration during this qualification although highlighted some of the differences between acceleration and top speed.

Acceleration during sprinting involves a ‘running step‘ which is the name I give to the action of driving the leg forward to propel the body forward.

Level 3 Dynamic (Decision making): Rolling starts and catch me if you can reactive sprints

I like to progress on to First step speed (FSS) after Straight ahead speed (SAS) because the technical model of accelerating is still relevant.  The focus is still on the running step.  However, the initial body position will be different.  Some coaches will call it quickness training, speed off the mark, or just speed.  I like to call it first step speed because the actual first step (which is a explosive running step in the direction of travel) is still employed.  But you might be going forwards, sideways or backwards.

If the movement is planned you will see the athlete bias their weight over one of the legs so they can pivot from that leg.  In a planned movement the first step is taken using a pivot step off the lead leg to allow the back side leg to come through.

In this instance there is no ‘wasted’ movement away from the intended direction.  I use the word wasted in inverted commas because some coaches talk about a false step being a wasted movement.  In this situation it would be but it is important to realise when it isn’t- which we will come to next. 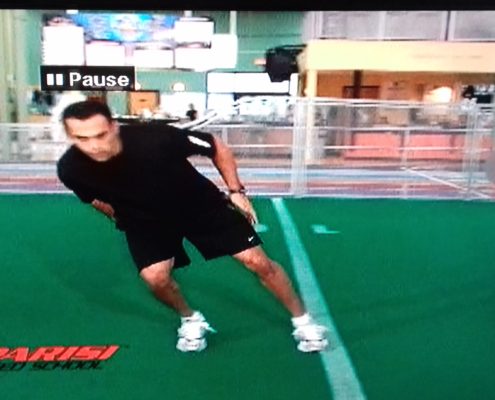 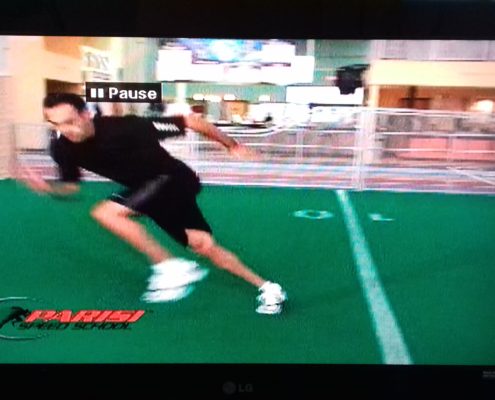 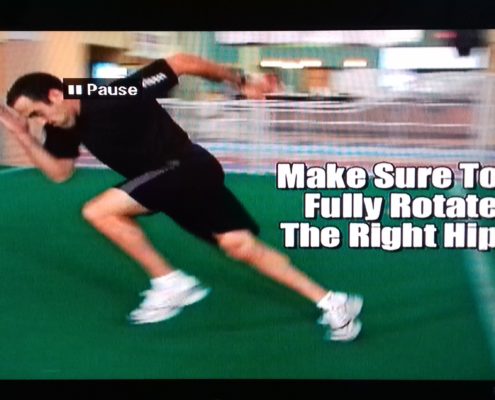 In the example above of a stance used for a planned 60Y Dash as part of a baseball test, the athlete knows they are going in a planned direction.  There is no choice of Left or Right so they can pivot off inside leg closest to intended direction.

Reactive movement means the athlete has to quickly reposition their body from a neutral athletic stance to a position to produce optimal force in the intended direction.

This drill was technically a reactive drill- but the athlete had only one choice AND he had quite a lot of time to catch the ball after 1 bounce as the feed was quite close.  In my experience if the athlete has to make a choice of going left or right and has very little time you will also see the dig step, which is the repositioning of the back side leg.

Gravity step is where a player who is moving in one direction will bring the leg that is towards that direction in under the body. This bending of the knee and bringing the leg inward causes the body to literally “fall” in the direction the person wants to move. This has been shown to actually be the fastest way to get the body at rest to move in the direction of desire.  This is something I have observed when the person is in a wide stance- which we will talk about now.

Dig step: (back side leg)

One of my most popular blogs talked all about the plyo step:

Why the key to getting faster is to step back first

A dig step- also known as a plyo step or false step is often rejected by coaches as a inefficient way to initiate movement because it involves wasted movement away from the intended direction.  But Lee Taft and others have championed this step for decades as it is part of the body’s fight or flight response when we have to move somewhere quickly under extreme time pressure.  It involves pushing the back side leg away from the intended direction.

This is critical to our understanding of FSS. Depending on the width of stance athletes may initiate movement in different ways BEFORE starting the first step.  This ‘initiation’ of movement is a kind of reorganisation of the body to get it into a body angle ready to accelerate.  I loved the quote ‘‘trading inches for angles.”

Wide stance- from here you will commonly see a gravity step

I talk about these things in more detail below in latest Daz Dee TV Episode 17:

For me this covers everything else that gets us from A to B that doesn’t involve use of a running step associated with sprinting.

This includes side steps and cross-over steps and it also covers the important technical model of changing direction.  Before I get the haters I realise that you can still perform things like side shuffles and cross-overs very ‘quickly’ but I have put them in this classification as I want to keep First step speed to strictly sprinting mechanics using the running step.

Level 1 Stationary: Cone drills (1 step and side shuffle to stop)

Level 2 Dynamic: 5 metre decelerations there and back (with a stop, progressing to no stop)

Level 3 Dynamic (Decision making):  Reactive 5m there and back and Pro Agility 5-10-5

Most sports will utilise one of more of the three types of speed mentioned above.

Tennis- uses FSS and a lot of MDS and has the unique aspect of the ‘split step’ which is a jump which precedes the first step.  In sport many of the aspects of speed are submaximal because they don’t involve sprinting.  But they do require the body to move it’s position quickly.  You will see this in the examples below. 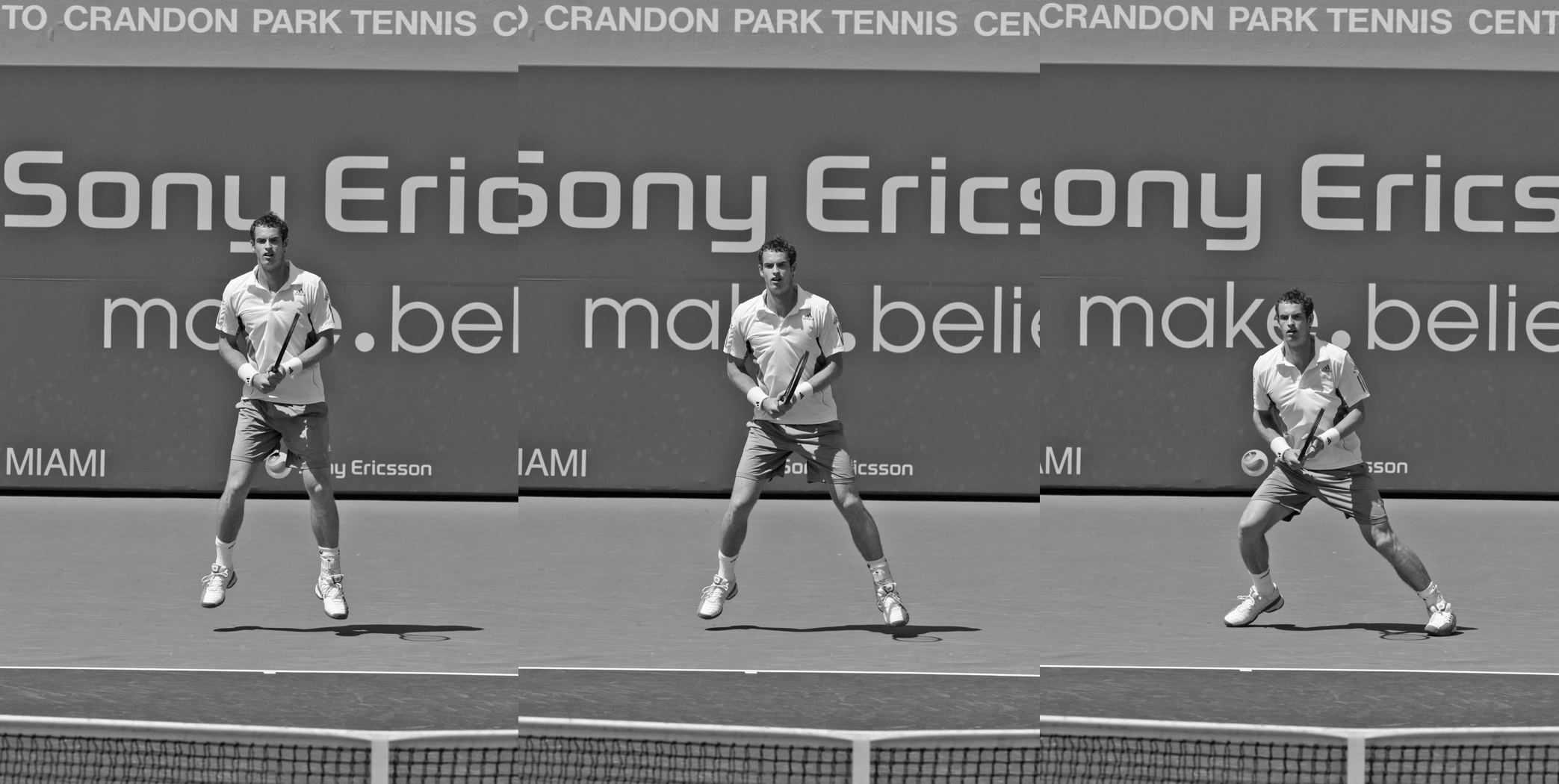 Basketball- uses a backwards step known as a drop step to pass a defender who is standing behind them. 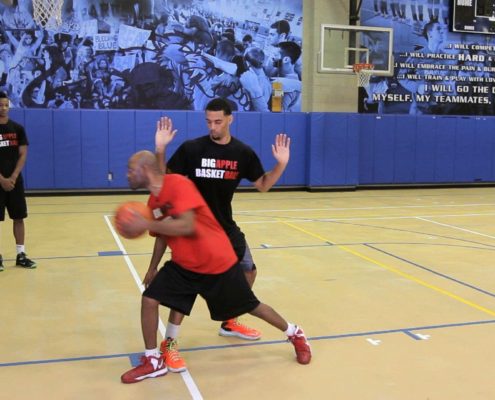 American football- use a backwards step known as drop step, followed by a cross-over to initiate quarterback pass 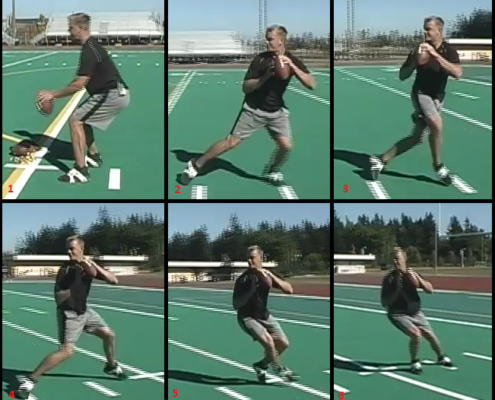 What can Personal trainers learn from working with kids?
Scroll to top