So if you read the last blog on the Gosling Tennis Academy Pro Team Pre-season you will know that I promised you I would follow that blog up with more information on how the second half of the pre-season panned out.

As a guideline below is how I would ideally like to progress in my change of focus over the course of a training block if I had an extended period of time such as 12-15 weeks.  This would allow me to spend the first week or two building a foundation of strength endurance and then spend a good 6 weeks on strength/power and conditioning respectively followed by a week to 10 days taper. The bias between amount of time on strength/power vs. conditioning would be determined by the athlete’s needs. More fit athletes would spend less time doing conditioning

Given that most of the tennis athletes were coming in for 4-6 weeks only with a good baseline level of strength the aim was to spend the first 2-3 weeks focused more on strength and power and the last 1-2 weeks more on conditioning.  I felt that it was only going to be possible to focus on a couple of training goals in such a short period of time so I had decided to focus on developing the qualities of strength and power in the first few weeks and then learning to endure these qualities for the remaining few weeks.  Had the athletes been lacking in strength I might have spent more time focusing on developing strength and power.  Below is an example of how I would set the week up to focus more on strength/power. 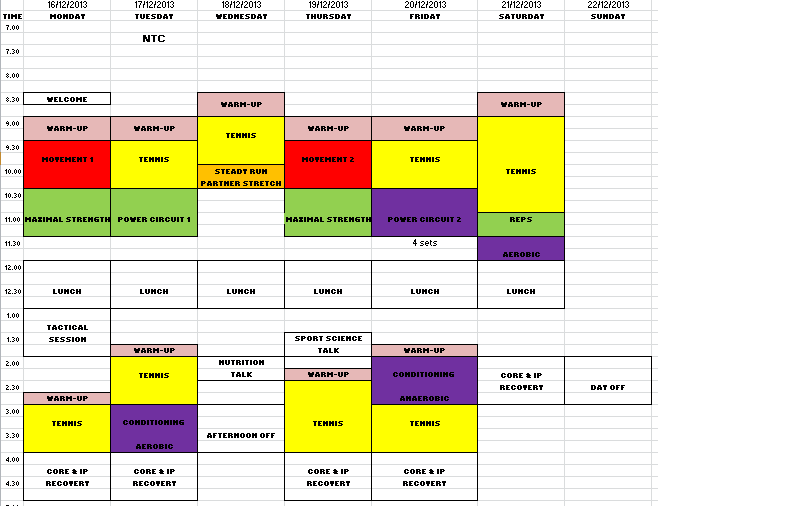 In this scenario there are 4 weights sessions.  I have gone into more detail on the rational for these sessions in the previous blog.  However, in summary I can say that there were two sessions that included heavy maximal strength lifts, 1 session (power circuit 1) that contained explosive lifts and a weekend session which contained muscle hypertrophy work only.  This way I was satisfied the athletes were getting a good dose of strength training but there was in built variation into the loads being worked against.  You could put the max strength lifts and explosive lifts into the same session but for reasons I have discussed in previous blog posts I wanted to separate the maximal strength and power over Monday and Tuesday.

The power circuit I designed to develop explosive power used weights with plyometric complexes.  Pairing weights with bodyweight jumps can work well but in my opinion if used too much can just dull the neuromuscular system.  Use them judiously and it will amplify the training affect.  If you have more time than 4-6 weeks I suggest doing complexes toward the end of your max strength/power phase and then take them out in the final conditioning phase.  For the rest of the time you will get good gains by just focusing on doing the plyometrics and weights separately.

I had less time so I decided to bring them in from the beginning.  We set up three stations which the athletes worked through, starting with a moderately heavy explosive lift for 4 reps on each side and then following that with two plyometric exercises (around 8-10 reps) which were started within 75-seconds of the explosive lift.  Having completed one station of three exercises there was a 2-minute rest before starting the next station of three exercises.  Coaches like Dan Baker have shown that 50-60% 1RM works well for explosive jump squats and bench throws.  However, as the lifts were explosive by their nature they were using % of bodyweight as a guide and aiming for 50-60% of bodyweight.  So an 80 kg guy would be looking to snatch 24kg in each arm for two arm snatch or just the 24kg in one hand for a single arm snatch (as described below). 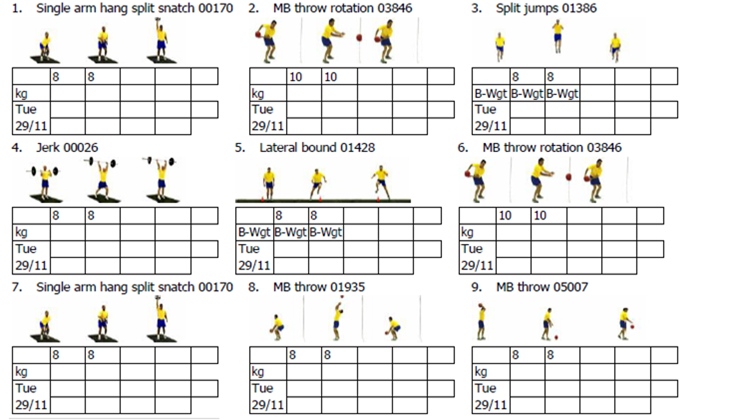 Earning the right to endure it!

Assuming the athletes were powerful enough to power snatch from hang with 50-60% bodyweight and were getting jumps above 60cm I was satisfied they had earned the right to endure the quality of power!  These athletes were well capable of achieving these benchmarks so I was more keen to develop their ability to endure power.  Therefore I made sure they also had a weekly fix of power endurance from week 1 (power circuit 2) with a view to doing it more in the conditioning phase.

Below is an example of how I would set the week up to focus more on conditioning. 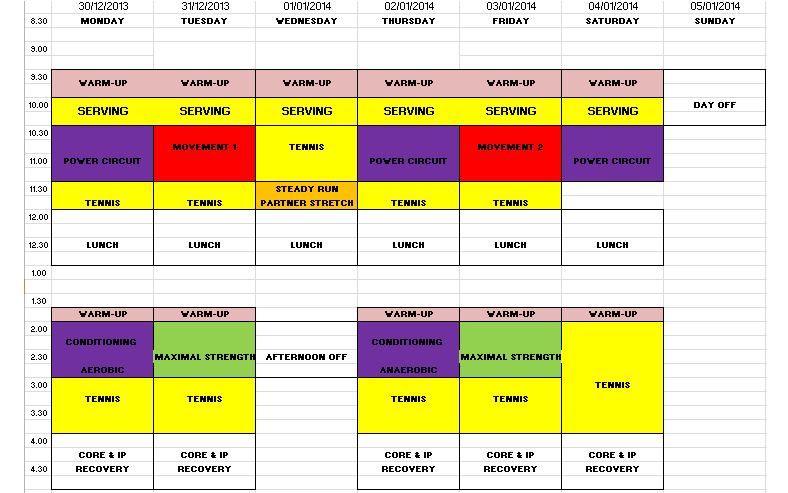 Notice the increase in power circuit 2 to 3 times a week.  The rational being that we would drop down to 2 strength sessions.  The strength would now be in more of a maintenance phase while we ramp up the conditioning.

For the power endurance circuit we started with 30:30 work and nearer the end we dropped to 20 second work and gave them more rest so it raised the intensity but also reduced the fatigue.  If I had more time I might have used a concept called a diminished rest interval set up.  Below is an extract from Eric Cressey’s–Ultimate Off-Season Training Manual
© Eric Cressey, 2006
www.EricCressey.com

• Week 1 serves as an introduction to football-specific
metabolic conditioning with a high – but not “punishing” –
volume of work.
• In Week 2, the training volume is decreased, but the rest
interval is decreased to maintain a continuous training
progression.
• There is no drop in the rest interval in Week 3, but the
athlete is forced to sustain the diminished interval from
Week 2 for a higher volume of work.
• Week 4 serves as an opportunity for the athlete to deload
on overall training stress while introducing the next fivesecond
reduction in rest time between sets.
• This reduction in rest interval is introduced in higher
volume in Week 5.
• The 20-second rest interval for which we’re ultimately
aiming is introduced in Week 6 in limited volume
• Volume at this final rest interval is amassed in Week 7.
• The deload in Week 8 provides for a chance to remove
fatigue so that the athlete will be in position to display his
metabolic fitness at the beginning of Week 9.
• This template may precede the preseason altogether in a
completely deconditioned athlete, while it would span the
late off-season and preseason phases in an athlete in
better metabolic shape (or, that athlete  may choose to shorten this phase to four weeks).

So instead of the standard 30:30 I used to get them working with some fatigue  I could have maybe stuck with a fixed work period of say 20-seconds and slowly reduce the rest over the training block from 40-sec to 20-sec!!  Anyway, here is a video of some of the  exercises we used for our 30-sec work periods. 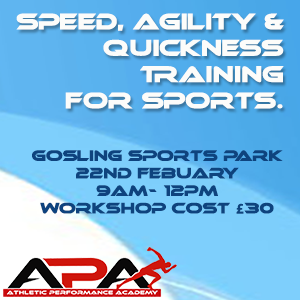 Athletic Performance Academy (APA) will be hosting a workshop with APA Director and Head of Strength & Conditioning at Gosling IHPC, Daz Drake.  This workshop will bring together the presenter’s extensive experience and background in the field of youth and pro player coaching to give the participant a thorough overview of the current theory and practical application of basic to advanced techniques that can assist in the development of speed, agility and quickness for Sport.

This half day workshop will be split into two parts and will include a theory session and practical training. 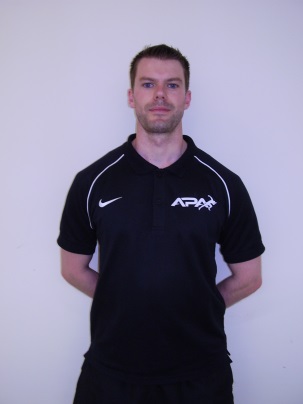 Daz Drake is currently Head of Strength and Conditioning at Gosling Tennis Academy and is Director of Athletic Performance Academy who consult with numerous sports organisations in the south of England.  Daz currently looks after the S&C programmes of some of the top ranked male professional Tennis players in the country, including 3 of the top 6 ranked British Men players.

Click on the link below to save your place on the workshop!

Stand by for further details of the next APA Workshop on Speed, Agility and Quickness Training for Sports.

To wet your appetite check out this video of some of the work APA have been doing with our pro team Tennis players at Gosling Tennis Academy this winter pre-season!!