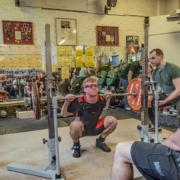 I recently had the privilege to be interviewed by Todd Davidson on his Platform to Perform podcast.  He reciprocated the favour and agreed to do a guest blog for the website!

I’ve followed Todd’s early career and he has always struct me as really dedicated coach who has a thirst for learning! He has been competing in power lifting and recently shared his thoughts on how he recovers from heavy lifts.  So I asked him to speak about this. 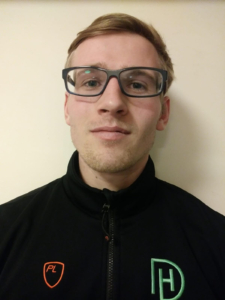 How I recover Between Heavy Lifts

Following episode 12 of the Platform to Perform (yes, a shameless plug), with Daz, we spoke off air about an Instagram story I posted on CNS fatigue.

As part of our chat, and this subsequent blog I will attempt to unpack the minefield of CNS fatigue, and as per Daz’s questions, how I try to recover between lifts.

For context, and those who haven’t been following my #Challenge500kg on Instagram, I recently qualified for Nationals in the 74kg weight class in Powerlifting.

After a day that involves no more than 9 total attempts on the platform, why do I crash and burn?

Surely it is the CNS fatigue?

For the last 2 years I have been competing I had also thought that. I’ve fallen asleep on the tube journey home, scrabbled my sentences on the evening following a meet, so it must be my CNS being fried?

Until very recently, I was convinced this was the case…but let’s hold up a second a take a look at the research

Firstly, before we dive in to CNS fatigue it is important that we define what the CNS is, what it does and what leads to CNS fatigue 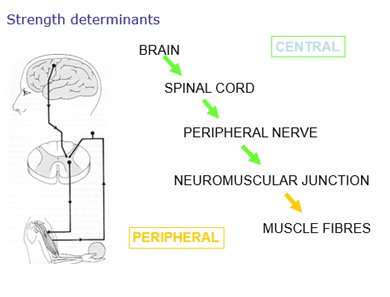 Anyone who has studied sport science will have been told the CNS is the brain and the spinal cord.

Before we differentiate between central fatigue and peripheral fatigue, I am reminded of quote by one of my favourite strength coaches, Dan John, when I say

‘the body is one piece’

Whilst activities may lean more towards one end of the spectrum (i.e. peripheral fatigue or CNS fatigue)..it is important to note that we cannot separate the two.

The second thing to note, is how long does the CNS actually take to recover?

If we think about it logically:

If the volume of training is low enough (as arguably is the case when doing 9 singles at meet), the nervous system may well be recovered by the next day, as was demonstrated in Howatson et al’s 2016 study, looking at male athletes clocking below 10.45 in the 100m and squatting in excess of 190kg.

Perhaps intensity isn’t as much as a key player in CNS fatigue as volume then?

Although recovering the next day might be useful if you aim to jump straight back into training following a meet, it doesn’t mean much if you failed to perform on the day.

So how do we go about trying to minimise nervous system fatigue when it comes to the stress of competition?

Firstly, stress in itself isn’t inherently a bad thing…it’s how we manage our bodies stress response (both short term and long term) that determines how effectively we can utilise our flight, flight or freeze response.

As a Powerlifter, I very much want my sympathetic nervous system to kick in and release adrenaline as a means of overcoming the physical and psychological stress of competition… but I don’t need my system to be going into overdrive every time I go to lift something  >90%.

Going months on end without touching weights at >90% means handling your opener will be novel stimuli.

Novel stimuli is much more stressful, be it psychological or physical, than stimuli to which you are accustomed.

For reference, Mike Tuchscherer, who is widely credited with being the first person to explicitly use of RPE in Powerlifting, has noted that his athletes can use singles at RPE nearly all year round…but depending on the lifter singles at RPE 9 (1 rep in the tank) seem to tail off after 2-5 weeks.

if the nervous system really took that long to recover would the Bulgarian weightlifting system (whereby lifters maxed out on their snatch, clean and jerk, and squats twice a day for 6 days a week for months on end rumour has it), really have survived as long as it did?

Now I’m not ignoring the drugged up elephant in the room,

Since heavy singles are likely too short in duration to mechanically tear muscle fibres, perhaps the Bulgarian weightlifting system provides anecdotal evidence that the CNS recovers much faster than most bro science has us believe in the first place?

When I posed Daz’s question about recovering between lifts at a meet to my coach his response was ‘how fried do you think you would be if you performed 3 max attempts in the comfort and confines of your gym?’

If you never practise the psychological stressors of competition, you will naturally perceive such situations as more stressful.

For anyone who dismisses the wrecking ball effect that stress can have on everything from your training to your immune system, please refer to Mark Sapolsky’s lecture series or book on ‘Why Zebras Don’t Get Ulcers’

Todd Davidson is an accredited strength and conditioning coach and will be undertaking a P.E PGCE, based at a Ealing Fields High School in September. As well as qualifying for the Classic National Championship in Powerlifting, with a 500kg total in the 74kg weight class, Todd has also published research on the change of direction deficit and is the proud founder of the Platform to Perform podcast.

Howatson, G., Brandon, R., & Hunter, A. (2016). The response to, and recovery from maximum strength and power training in elite track and field athletes. International journal of sports physiology and performance, 11(3), 356-362.

https://www.youtube.com/watch?v=3db3t70DFUY How to Improve Confidence Under the Bar (with specific reference to singles at RPE 8)