As you will all know APA does a large amount of our work in Tennis.  As part of our contract with Gosling Tennis Academy and my own personal role as Head of S&C for the International High Performance Centre (IHPC) there I get the opportunity to go down to the National Tennis Centre 3 times a year to listen to various people speak about topics relevant to our role as S&C coaches in Tennis.

So I thought I would give a ‘cliff notes’ Blog review of the four presentations and take home messages.  Many of the topics were personally areas that I am currently researching in great detail at the moment so it was great to test many of my ideas against what others are doing with the same information.  This Blog will kick off with a review on Heart rate monitoring.

I thought this was a really useful insight into how the LTA are using Heart rate monitoring data to support the training of their athletes.  Key themes were:

At Gosling we are lucky to be able to use the same wireless telemetry system as at the NTC, namely the Firstbeat system which is also used by the Rugby Football Union.   The main benefit is that it uses Heart Rate Variability (HRV) data (e.g., the time between individual heart beats) to measure the response rather than a fixed sampling rate like some other software providers.  Right Firstbeat- that’s your plug so I’ll expect our free upgrade next week!!

Tennis is just starting to use heart rate monitoring more widely now.  It will be a little while before its use becomes widespread like it is in Rugby and Football but it is getting more and more popular.  The key benefit to coaches is that it gives objective training data to help support whether the training load planned was actually what took place.

One of the things Emma said that was really insightful was that often players of similar tennis ability may have completely different responses to the same tennis session.  Whereas one player may get under-trained from a session, for another player that could represent a very hard session.  This means we shouldn’t assume that a session will affect everyone equally.

When I first started using Firstbeat (and to an extent I haven’t changed) I would mainly monitor Heart rate and something called Training Effect, which is a number from 1 to 5 to measure the overall ‘cardiac stress’ on the heart. However, Emma talked a lot today about Excess Post Oxygen Consumption (EPOC), as a good variable to look at to determine overall ‘Aerobic Load.’   This will give a good overall gauge of accumulation of lactate / fatigue as effected by the work-rest ratio and intensity of effort.

Typically the highest aerobic loads will be experienced by Tennis players during the ‘warm-up’ aspect of the Tennis session (ie., the first 20-30 minutes of rallying/consistency drills done where there is little interruption by the coaches or stoppages between shots).  This is often where the players will feel the most stress on the heart.

EPOC values for say a 10K run would typically fall around 200 and the curve would steadily rise throughout the race.  In Tennis you will get a big fast rise in the curve during the warm-up to maybe 200 then there will usually be lots of peaks and troughs throughout the session.

Below is a chart that Emma gives to the Tennis coaches to help them make sense of all the data.  The data on ‘Matchplay’ in the Top Right was taken from training matches used to pick players for the Davis Cup so these were really competitively fought matches.

The data on the bottom left was used to demonstrate how a training session that has a low aerobic load (bottom figure) has NOT been successful in replicating the physiological demands of the game represented by the top figure.  So if you are planning a session that is supposed to replicate a match it needs to have an EPOC peak of 84-130 (aim for 100 as an average guide). 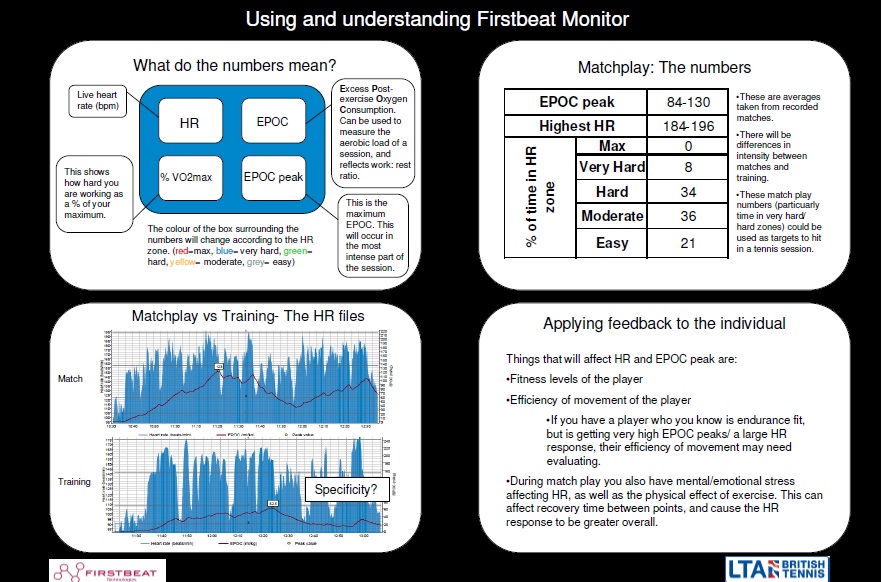 I guess I’ve covered some of these points already but the key thing for me is that Tennis has a culture that we are fighting against as S&C practitioners which is one of high intensity training with little to no planned variation in loading.  If it is varied it is not often planned.   We also have a culture of training for consistency/volume in the morning then applying these skills in matches in the afternoon.  There is also a culture of playing more practice matches later in the week.

These concepts makes intuitive sense as you want to ‘learn/train’ in the morning then ‘apply‘ in the afternoon.  Players also like to do more match play type training later in the week as they are getting ready to compete at the weekend. However, remember this means you are always practising playing your matches under fatigue.  This is useful as players will have to learn to play in the later stages of a tournament under fatigue.  But also remember that matches tend to be more competitive than training and have higher ‘mechanical loads’ from more sprints and changes of direction.  These need to be practised while FRESH if you want to get the highest effort levels out of the players.

The heart rate monitoring can help to EDUCATE players and coaches (both Tennis and S&C coaches) about the actual training load of the session.  Do you want your player to be getting more and more tired through the week? And did you even know that it was happening?

Below is an example of a week of monitoring for a coach who was known for wanting their players to work HARD twice a day for 2 hours each session, every day.  It was felt this was getting the player too tired so Emma took the EPOCpeak for the day across 5 days and showed that it fell significantly throughout the week starting at 200 and finishing at 69.  The moral of the story was that if the player had had an easier day on Tuesday after the 200 load they probably could have got another 200 out again later in the week. 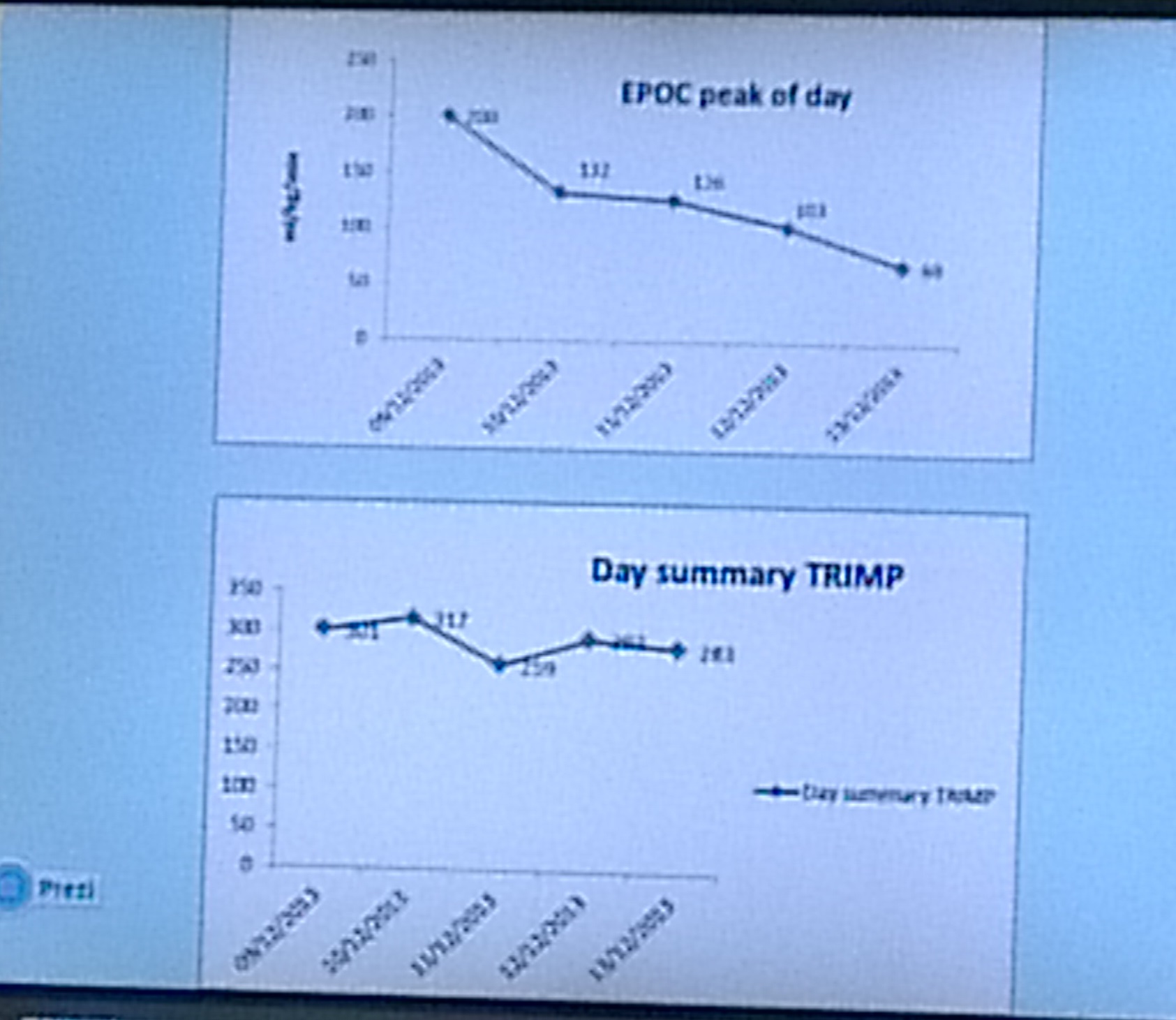 From speaking to Howard Green (Head of Athletic Development at Bolton Arena) he was describing to me the philosophy of the Swiss Tennis Federation S&C department which is to spend a lot of time in their conditioning sessions either doing:

This is on the basis that Tennis load is usually moderate overall.  While it is often ‘safe to assume’ that the overall Tennis load is medium in terms of aerobic load, the data above clearly highlight that unless we’re assessing we are guessing, and we might be getting it wrong.  Too many weeks like that for that athlete and we are looking at burnout.  Imagine if we were putting very high intensity intervals on top of that!!

Finally, to wrap it up Emma made a good point about Tennis Specificity.  Players will often get adequate load from playing tennis (although see above comment to qualify that point), so they don’t really need extra off court conditioning. However, if your monitoring indicates that a player is NOT coping well with the training load and would need a bit of a boost then you are probably best to keep them on the court.

Often these athletes are either bigger framed men and/or in some cases carrying a bit of extra fat mass.  If they are really out of shape you can get them off their feet and start with some bike intervals but ultimately that won’t address their movement efficiency on the court as they won’t need to support their weight on the bike.  So try and get them on the court and either integrate some conditioned tennis drills (such as Spanish drills and other basket drills) into the end of the session and also do some movement shadowing with medicine balls etc.

If like many of us have already experienced, the coaches and players are reluctant to do a Yo yo test to monitor the aerobic load of these players on a regular basis to see if they are getting fitter then something that can work well is doing a incremental treadmill test over 10 minutes starting at 6km/h (female) and 9km/h (male) at 1% gradient and increasing the speed every 1 minute by 1km/h until exhaustion.  Expect them to make 10 minutes.  If they can’t do that then however you slice it, they are not fit at a general level and would probably be wise to keep prioritising aerobic training until it improves!

I hope you enjoyed the first instalment.  I’ll be talking about ‘reactive strength,’  stiffness and running drills in the next one.