APA coach Konrad McKenzie will be doing a weekly guest blog looking at topics related to Tennis and the youth athlete.

In today’s blog Konrad gives an overview of the the physical demands of the game using the APA framework of the 5 S’s of Athleticism.

I am passionate about training youth athletes, I have had the pleasure to work in the sport of Tennis and have been fascinated at the athleticism it requires.  When we pause and think about it, Tennis players need to display high levels of perceptual-cognitive skills along with the physiological characteristics of endurance, strength, power & Flexibility to name a few. Athletes will display these qualities simultaneously within a game of Tennis. Whilst this topic deserves a book, this blog will briefly talk about some of the physical attributes of a modern day Tennis player (Endurance, Strength, Speed, coordinative Skill & flexibility) in the youth game.

At APA we refer to these as the 5 S’s of Athleticism- Skill, Suppleness, Strength, Speed and Stamina.

Tennis is one of the few sports which is unpredictable in terms of point length & match duration, this means that matches could last for a few hours. Typically, the average rally length in junior players is 4.8 seconds with a rest interval of around 10-30 seconds (LTA, 2019). Research papers have concluded that the majority of time is spent in the lower- intensity zones (Kovacs, 2006) suggesting to the reader that Tennis is predominately an aerobic based sport. However, due to the explosive nature of the sport (serve, change of direction and ground strokes etc) it would be wrong to disregard the large demands placed on the anaerobic system. I would argue that actually it is predominantly Anaerobic and high levels of aerobic conditioning will aid the athlete recovery in between points. Thus, high levels of anaerobic and aerobic capacity are reported in high level junior players. Lastly, the style of play will dictate how much emphasis is placed on a specific quality for example, counter punchers will usually have superb fitness levels. 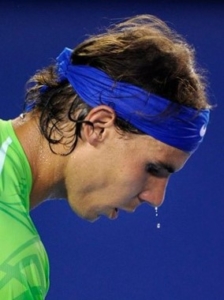 Tennis is a sport with a large amount of accelerations (average 4.0m/s) and decelerations (average -5.2m/s) (LTA, 2019). Also, a junior level athlete may perform an average of six changes of direction per point in a competitive game, meaning that he or she will experience forces up to 3-6 times their body weight on the change of direction leg. In the elite women’s game, some findings suggest that players are asked to brake 6 m/s in 2 metres! (LTA, 2019)

Which is interesting if we are in the area of youth development and preparing aspiring professionals! These requirements need high levels of strength to perform these tasks efficiently, gaining a competitive edge over their opponents! Tennis has the added characteristics of being a rotational sport and athletes will perform a repeated number of serves, which require a create deal of strength and power to produce high quality shots but also, to tolerate the repeated loading and shear forces placed on the joints, especially around the shoulder and wrist. In addition the tennis athlete will need the capacity to rotate in multiple ways and speeds to play the shot they want.

Speed kills in a number of sports, particularly Tennis! Players will need to possess the accelerative, predominantly lateral, qualities in getting to the ball but also recovering after a shot has been played. Whilst top speed is rarely attained in Tennis a player could reach up to 75% of their peak running speed within 9 metres from their start point (Kovacs, 2016); mean figures at Junior Wimbledon showed accelerations at around 4m/s (LTA, 2019). Interestingly, figures have shown that it takes around 2.7seconds for an elite male player to get from the middle of the baseline to outside the tramlines, play a shot and get back to the centre of the court (LTA, 2019). Pretty fast if you ask me. 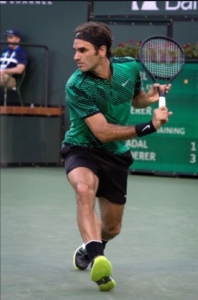 “Play the shot you want to play instead of the one you have to” Matt Little.

Moreover, athletes need to high levels of quickness and response time to maximise the time they have to set up for a shot.

As you can see in this picture Tennis will require you to hit some shots from awkward positions! You will see players hitting balls from some pretty extreme ranges of motion. Whilst not every shot will require the splits (or extreme ranges of motion), moving from a split step is an important component of tennis and requires good flexibility. Whilst we want athletes to be display good levels of flexibility we also want athletes to express strength in those ranges, this will build suitable capacity to support the loads placed on the body during a game of tennis. 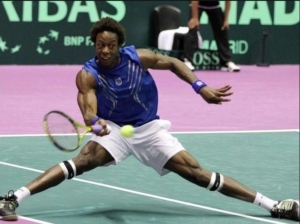 This is a big topic and will fall outside of the scope of this blog but to try and put it into simpler terms “Coordination is when the central nervous system organizes the body to solve a movement problem” John Kiely. Coordination can be further broken down into subcomponents such as Balance, Differentiation, and Adaptability. Whilst I believe all the aforementioned qualities will impact coordination; Tennis is an early specialisation sport therefore, youngsters from a very young age will take part in some major junior competitions. Now, with access to athletic development youngsters are exposed to a wide variety of movement problems through physical literacy and global movement skill sessions for coordination and injury prevention.

Great tennis players will display finesse, smoothness an elegance when they play the majority of their shots and a player will have to produce excellent coordination in activities such as crossovers, hitting and decelerations in a variety of conditions.

Whilst I don’t want this blog to sound too reductionist I want to give the reader a taste and inspire him or her to do more reading around physical preparation for Tennis. I have worked in a few sports and Tennis has fascinated me, due its athletic requirements.