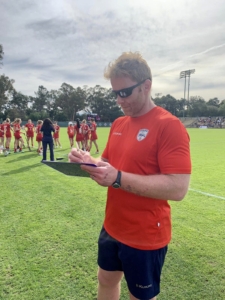 James is the Technical Lead for Performance at Surrey Sports Park.  He is also contracted to work with Harlequins to run their speed and agility programme for their first team squad.  He teaches at the University of Surrey, heads up the athletic development for England Women’s Lacrosse and is also completing a PhD in Biomechanics and motor control of accelerative sprint running.

James on his approach to training in terms of speed for sprinters versus team sports.

There might be a little bit more of an individualised approach that can be taken to impact team athlete’s sprint performance.  This is especially true as the positive effects of a more general strength programme diminishes as the athlete grows in terms of their training age and level of expertise and their strength levels.  I think there’s more scope within a team sport setting to impact on an athlete’s speed compared to a sprinter who that’s all they’re training for.  I think it’s a little bit more untapped.”

”In terms of the sprint strategy this concerns some of the key technical markers and higher order kinematic variables such as step velocity, step length, step rate, contact time and flight time and how these variables change across the acceleration phase.

You can have different ways of being fast over the first 10 metres.  It will probably be achieved in about seven steps, and you would expect to see that contact times will reduce with each step and the flight times will increase with each step.  In the initial steps the contact times will remain longer than the flight times.  This makes sense because we know that we need to generate large amounts of horizontal ground reactions forces to produce the horizontal impulse necessary to accelerate in those initial steps, and we can’t produce that force whilst in the air.  Because of its importance it is possible that someone with shorter contact times (which could increase the number of steps) and someone with longer push-offs could achieve the same overall net horizontal impulse and therefore both be equally effective strategies.

It becomes a problem when it is too extreme, so if someone is really chopping their stride and producing really short contacts at the start, and they’re not going to be spending enough time generating that horizontal impulse on the ground.

In terms of strength related qualities there are three main assessments I use:

The hip extensor contribution to the horizontal ground reaction force production is pretty well recognised now largely thanks to the work of J.B.Morin. It plays quite a key role in accelerating the centre of mass forward during the first stance phase.  I look at peak torque and also the rate of that production.  It helps me to identify whether we might need to slant the training more towards max force type work or more rate force type work with regards to the hip extensors. 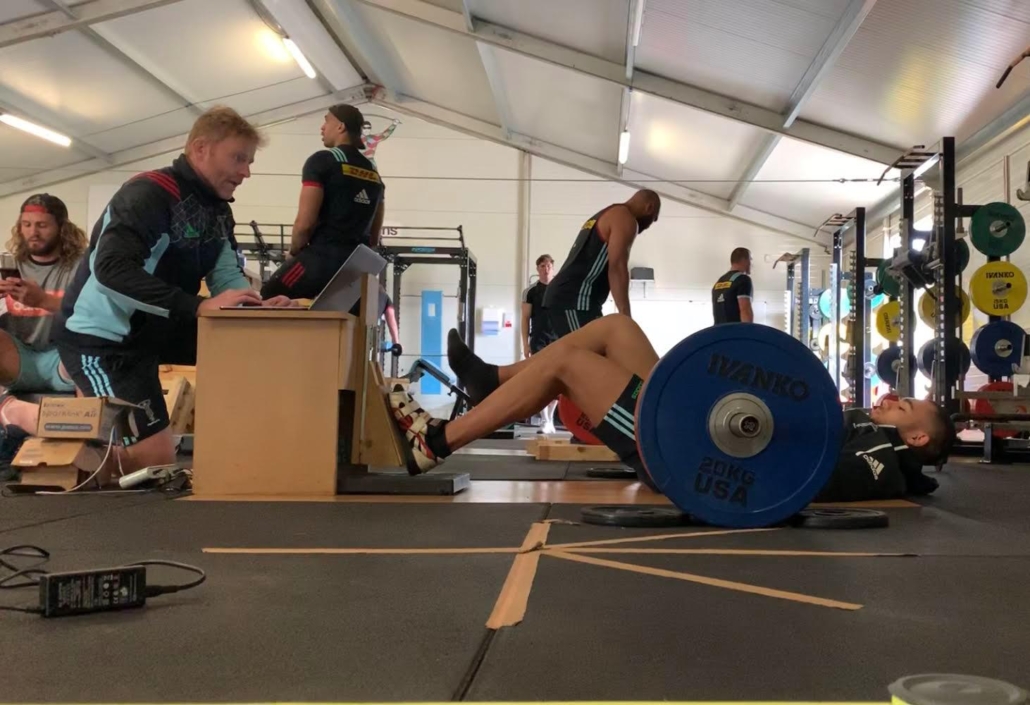 The squat jump force-velocity profile follows the methods of Samozino and his crew.  We can work out peak power of the leg extensors, and it’s a bit more biased towards the knee extensors.  We can look at the optimal levels of force and velocity that might be required at a given peak power to maximise that push-off performance that might be related to those initial steps.

This allows us to then tailor our squat-based pattern work to be more max force orientated, more force at higher velocity or concurrent  development of both.

The third strength quality assessment I use is like a repeated in-place jump test for RSI. This allows us to get an idea of how they’re able to limit the amount of leg definition, so stiffness but also looking at how they’re able to store and release the elastic energy effectively.  Once they’ve reached a certain strength level I feel like it’s quite important to become a little bit more specific with the approach taken.” 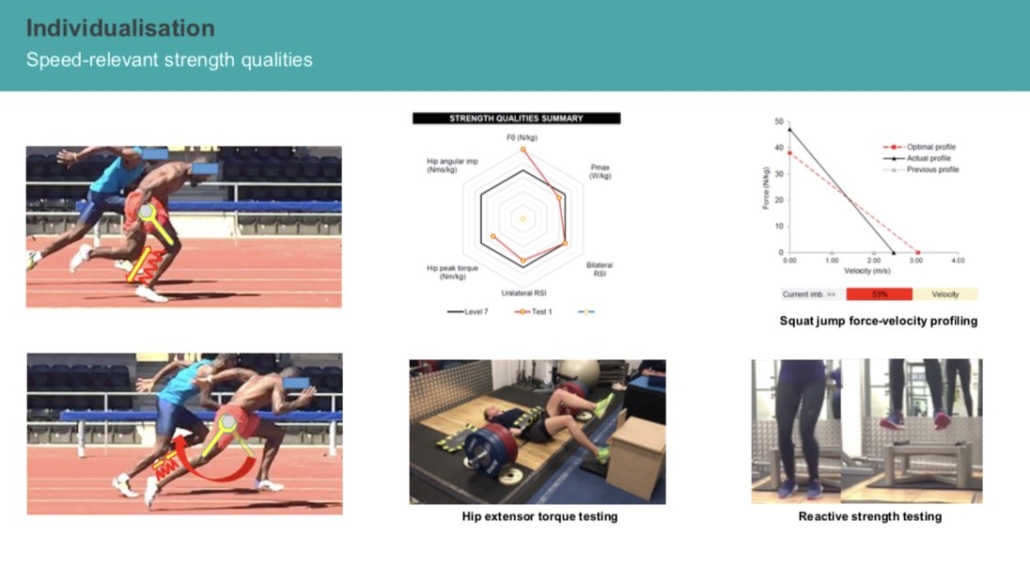 I divide my speed sessions into five different sections

Drills for me can be a really useful coaching tool, in my opinion, because they allow you to almost over-emphasis an aspect or body or limb position you’re hoping the athlete will find when they sprint.  And the athlete can then ”hold onto” what that over-emphasis feels like.

Free Sprinting or change of direction:

”The stage of the season or the logistics of that week, and individual needs of the players, will determine how many of those five components will be in an individual training session.  In a typical 45-minute session I’ll usually cover four to five of those components.  Whereas if less time is afforded such as towards the season, we might need to pick and choose from those five components which we feel are the most important at that time.”

”I think one of the things to consider is that sometimes a hamstring injury just happens!  And we can over analyse it and pull things apart programme wise.  I think gradual exposure and progressive exposure to sprinting distances and speeds is important.  Tied in with that is the technical focus of how they sprint.  Then I think inevitably there needs to be some strength-based work for the hamstrings, eccentric and isometric and I have no problem whatsoever with nordics.

I think it’s really quite important to consider the strength qualities around the ankle.  Do they have the reactive strength type qualities, the stiffness with the right level of compliance at the ankle joint? Because, if they don’t, then they most certainly are going to over stride when they sprint, and over utilise the hamstrings.  Their strategy to run fast is going to be to over utilise the hip extensors to pull them through the start phase, rather than striking closer to their centre of mass and being able to spring off quicker as a result of a stiffer and tight ankle.

Also what’s their lumbar and pelvic control like? Are they weak through certain areas? Are they just lacking coordination? Can they not stabilise their pelvis because of, it might be simple things like the hip flexors want to take over everything, are they not able to counter that through their abdominals?”

”Often for each individual they might need a combination of different cues that work for them. A lot of S&C coaches fall into the trap of seeing that their sprint technique has ”improved” and automatically think that they’re running faster.  I can tell you that 99 out of 100 times, in that acute setting , if you cue someone and they change their technique from how they normally sprint, they will be running slower.

Now that’s absolutely fine if that’s part of a longer term strategy to try and shift them towards a certain technique.  But I think we just need to be a little bit cautious in that they will be running slower in that acure situation.  I think that sometimes it’s necessary to explain to the athlete that during a match or during testing or whatever, at a key time where they have to run as fast as possible, don’t think necessarily about changing your technique.

Now there might be a flipside to that, that if someone’s a real injury risk waiting to happen, then obviously you might want to adapt it.”

”It completely makes sense, because if you think all those individuals, the amount of time they’ve spent training would have been more in the gym than it would have been out doing speed-related stuff. Then you consider that not all but a lot of educational programmes, degrees, courses out there, there’s probably a lot more emphasis on strength training as there is to speed.”

It is clear that James has developed a very comprehensive assessment battery and has a very high knowledge of the sprinting technical model and the various components of an optimal sprint strategy.  What was most interesting to me was the idea that in some cases it might be more optimal for an athlete to take more steps than the typically reported seven steps over 10 metres -provided an athlete can achieve the overall net horizontal impulse required.

Clearly in order to know this for sure James is able to measure specific variables such as step velocity, step length, step rate, contact time and flight time and build up a profile that isn’t just based on outcome measures of split times.  He also uses a comprehensive strength assessment of not just leg extensor strength but hip extensor and ankle stiffness. 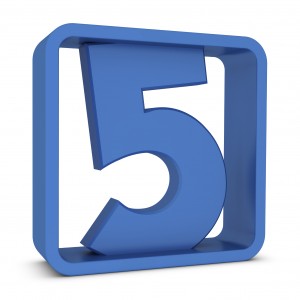 APA Are Recruiting!
Scroll to top