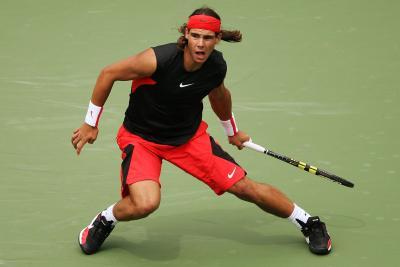 As stated in the first blog, one way to conceptualise the forces acting on the body is by using the F-V curve and placing various tennis actions on the curve.   I ask my coaches to do this exercise when they first work in Tennis with APA and so in Part 2 of this blog I will present an example from one of my coaches. 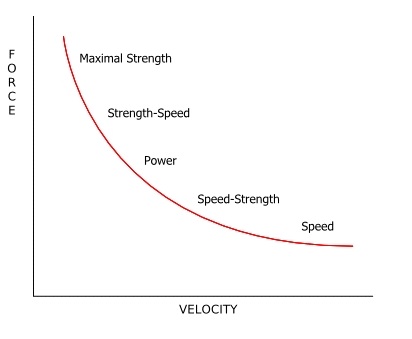 Most strength and conditioning professionals are familiar with the physical representation of the inverse relationship between both force and velocity, otherwise known as the ‘force-velocity curve’. The charted area includes a y-axis representing force measured in newtons (N), as well as an x-axis representing velocity measured in meters per second (m/s).

Movements such as a one-repetition max (1RM) back squat are a high force at low velocity, whereas a countermovement jump is high velocity with relatively low force. Somewhere in between these two areas is the ”sweet spot,” otherwise known as peak power, which can vary in percent of 1RM depending on the exercise selected. Additionally, scattered both above and below the peak power zone are strength speed and speed-strength zones, respectively, depicted in the graph above.

I put sweet spot in inverted commas because it refers to the load that optimises power output for a particular exercise- such as a squat, power clean, jump squat to name but a few popular ones.  The perceived wisdom around training at the optimal load is a hotly debated topic- which I will park for now, as I’ll write a separate blog on the topic.

For now I want to give some practical examples of Tennis actions that occur and make a case for their place on various points on the F-V curve.

As promised, first off, here is the example one of my coaches created- which I have to give credit to Matt Kuzdub for- because the coach admitted he had read his blog! 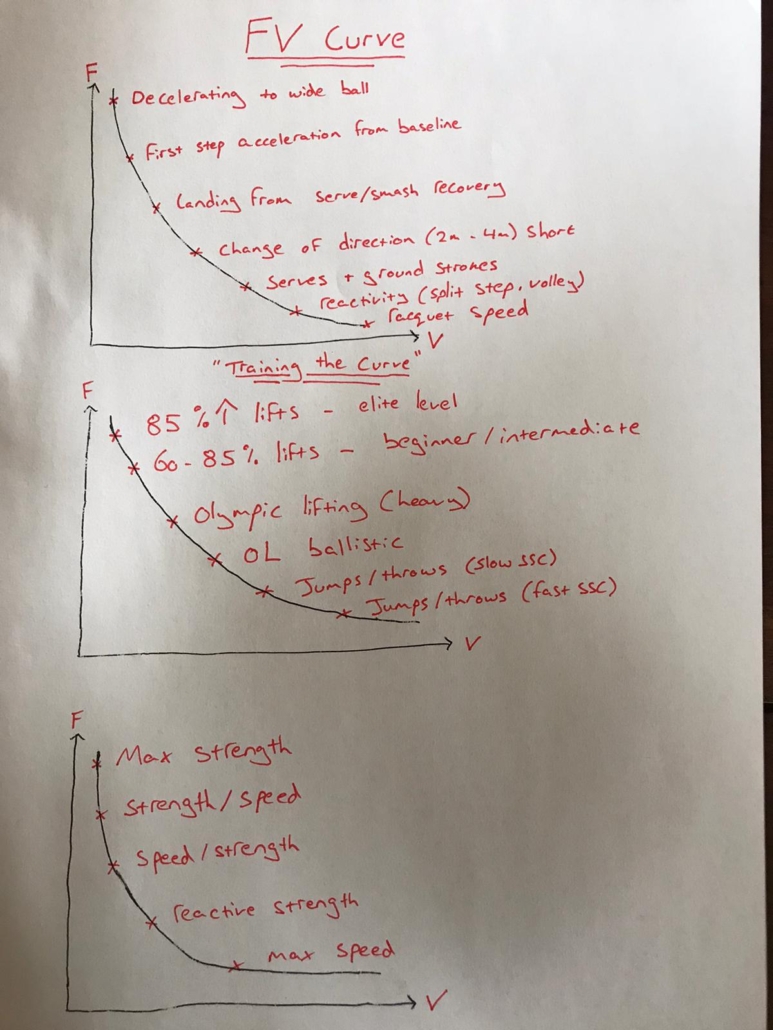 At APA I have simplified the F-V curve into 4 main categories.  This forms the basis of the APA Method for Strength.  Although I go into great detail in this blog to highlight the relevance of these categories to Tennis, I would regard this strength continuum and the methods chosen to train them as more ‘general’ in nature.  This is because the majority of exercises are based on loaded and unloaded jumps that could be applicable to many sports.  If we were to use Bondarchuk’s terminology most of the exercises would be General preparatory, and Specific preparatory. 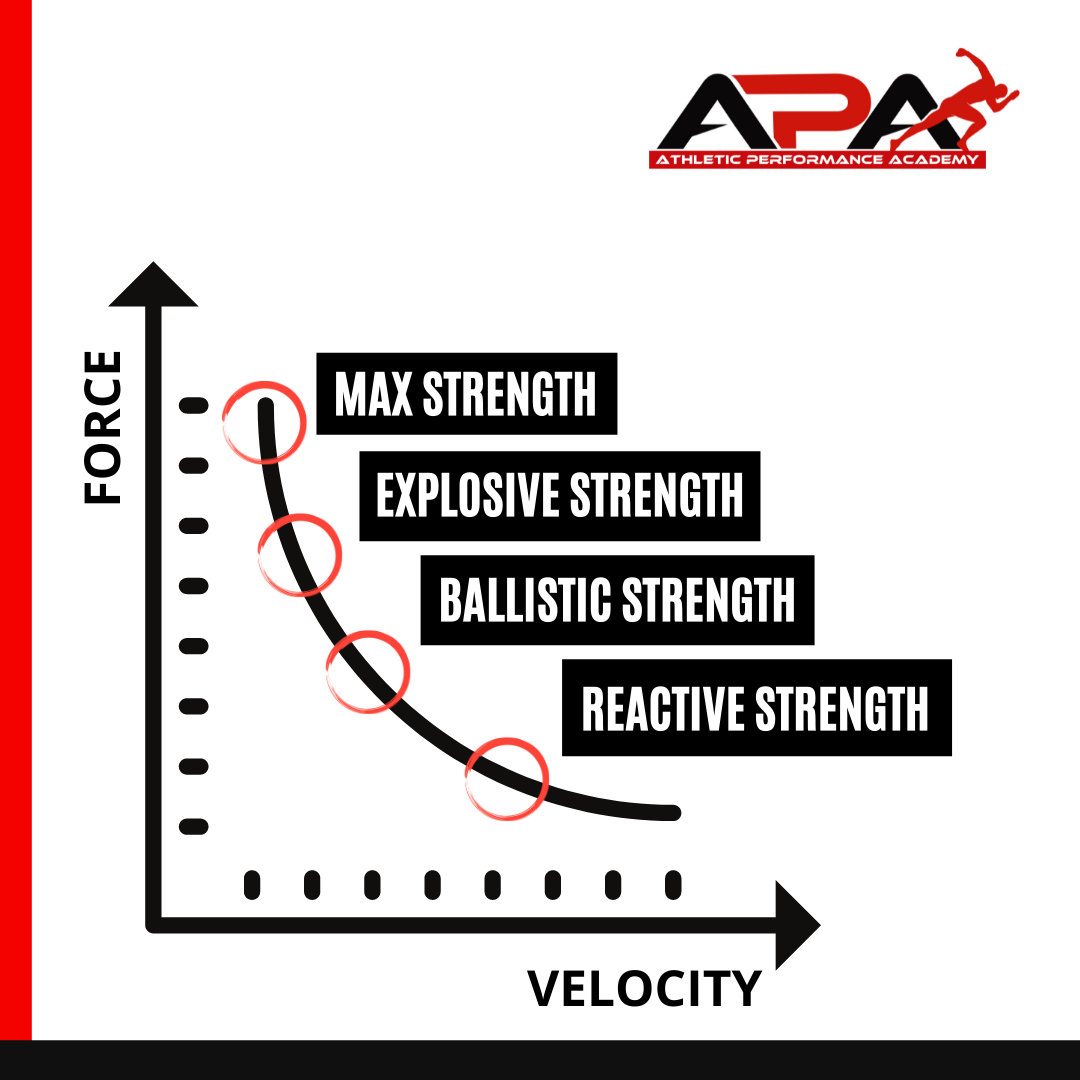 An important consideration to keep in mind is that sports movements are usually executed in a mixed regime of muscular contraction.  For example, during a single explosive movement in which the athlete has to displace a heavy load from a standing position, before initiating the movement, the muscles work in an isometric regime. As soon as the developing isometric force-effort achieves the level of the opposite resistance force, the movement starts and the muscles begin to work in the dynamic regime.

In the sport of tennis there are various actions that place high requirements on maximal strength.  We can break this down into Force Absorption and Force Production.  Think heavy back squat above 85% 1RM.  Each set typically includes 1-5 reps depending on the load chosen, as well as full recovery between each set.

Force absorption demands are highest during deceleration from high-speed actions including the landing from the serve and the last few steps of deceleration to a wide ball (i.e., penultimate step).

Force production demands are highest during the initiation of movement (after the serve and after the change of direction from a wide ball), as well as when the player is wrong footed (see below).

In the sport of tennis there are various actions that place high requirements on explosive strength. Leg drive on serves, and the take off phase of big ground strokes, as well as the initial acceleration to the ball, to propel the body in the direction of the ball over the first 10 yards (see below).

This zone is a step away from maximum strength, employing the use of maximum to moderate muscle contractions with a secondary focus on velocity. While much greater power outputs are seen in this range than max strength alone, strength still remains the primary emphasis. Moderate to high loads should be used.  Think Olympic Lifts (80-90% 1RM) and Back squats 60-80% 1RM with 2-5 reps occurring within a given set and complete rest being achieved after each set. 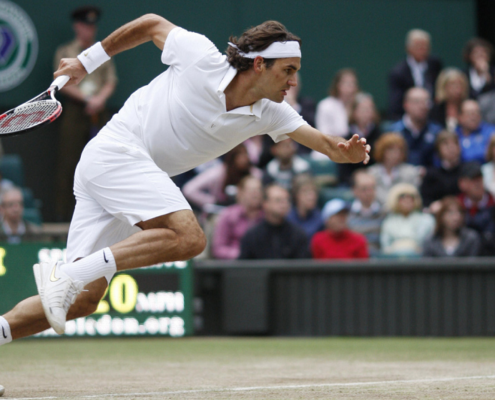 In the sport of tennis there are various actions that place high requirements on ballistic strength. Acceleration phase on serves, and ground strokes, as well as most tennis movements within a few metres (see below).  Think loaded jump squats (30-60% 1RM), med balls and slow SSC plyos.

This zone is the inverse of explosive strength; in that velocity takes the primary emphasis, and force becomes secondary.  As with all of the other previously mentioned qualities, complete rest should be sought between sets, and a target rep range of 3-6 reps per set is optimal. Speed is the primary emphasis in this zone. 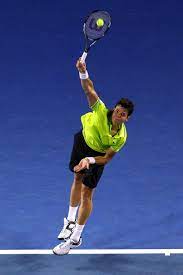 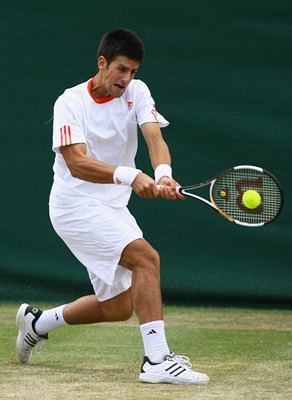 In the sport of tennis there are various actions that place high requirements on reactive strength. Racket head speed on serves, and ground strokes, as well as tennis split steps (see below) and most movements that don’t require you to move much at all.  Think fast SSC plyos as well as top speed sprinting (although top speed is not specific to tennis).

In this zone, the single most important variable is the velocity with the greatest degree of elastic/reactive strength, one can execute a movement at. Very low loads are used to train this method and, in some instances, no load at all. No more than 20-30% 1RM should be used when training reactive strength with plyometric movements being highly beneficial. Anywhere from 5-12 repetitions can be executed within a given set, but it is imperative that coaches discontinue the set when any decrease in velocity occurs because absolute speed is then no longer being trained. It then makes clear sense too that maximum recovery should be given between each set of exercises in order to ensure maximum velocity. 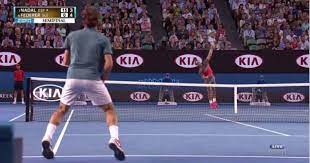 Shifting the force-velocity curve to the right, or in other words, increasing the rate of force development, is essential for developing successful strength-power athletes. Athletes are at a major advantage over their opponents when they’ve developed greater explosiveness and the ability to display high levels of power. Coaches must ensure that they not only understand the force-velocity curve but also how to practically train each zone within it relative to their athlete’s needs.

Below is a Table of the recommended training prescription taken from the article ”How The Force Velocity Curve Relates to Sports Performance.”  I will be creating an updated APA Version replacing the terms with Max Strength, Explosive Strength, Ballistic Strength and Reactive Strength.

I hope you found this article useful.

Does the Jump Squat Fail to Deliver?
Scroll to top